Services are rated more highly than those of other cities.

Satisfaction with City of Austin services is growing year-on-year and services are rated more highly than those of other cities, according to a new survey.

The City of Austin’s 2018 Community Survey found that almost two-thirds of respondents (65%) were either “satisfied” or “very satisfied” with the overall quality of City services. That’s an increase of 14% compared with the previous year.

The 65% satisfaction rate for service quality is significantly higher than the 44% average for US cities with populations over half a million. It was a similar story with overall customer service, with Austin scoring 57%, compared with 35% nationally.

Two areas where the City scored lower than the national average were emergency medical services and traffic flow on major city streets.

Aside from the 14% year-on-year increase in respondents satisfied with City services overall, double-digit increases were recorded for Austin libraries (up 13%), effectiveness of communications (up 13%), and the City’s efforts to promote and assist small, minority and/or women-owned businesses (up 10%). Levels of satisfaction also increased with City park facilities, flood control efforts, and overall quality of life in the City.

Kimberly Olivares, Chief Performance Officer for the City of Austin, said: “Overall we’re seeing positive results, with satisfaction among residents going up, and many City services ranked above the national average. We are now able to dig into the data so we can better understand levels of satisfaction among different areas, demographics, and communities. We know there is more to do and we’ll be working hard to build on these results by continuing to focus on improving City of Austin services.”

The survey was conducted in Summer and Fall of 2018, by a randomly selected sample of households, in English, Spanish, Vietnamese and Mandarin. The sample included homes with traditional land lines and cell phones. The survey was initially sent through mail, but individuals had the option of completing it either on paper, over the phone or online. This year saw 2,261 surveys completed with at least 200 from each of the City’s 10 Council districts.

The purpose of the annual survey is to assess resident satisfaction with the delivery of City services, to compare Austin’s performance with other large cities, and to gather input from residents to help set budget priorities. 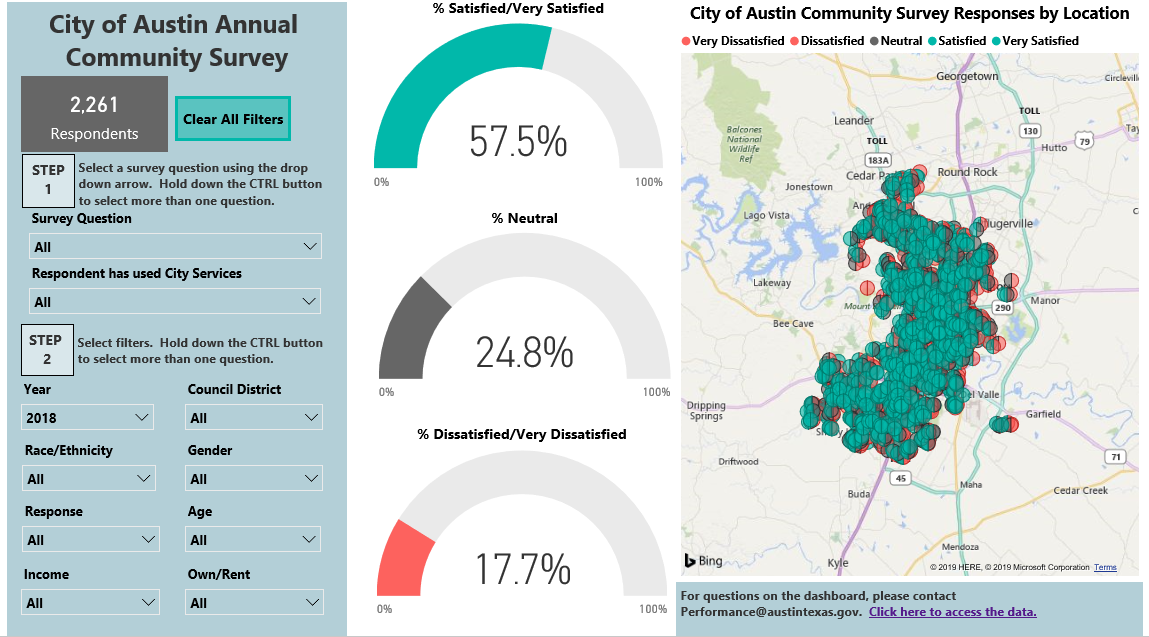